A New Way to Sell Books

People who practice impact entrepreneurship often become wealthy in a relatively short time. These individuals use their wealth to make a further impact. Elon Musk, for example, is using part of the revenue from founding Paypal to fund Tesla and its efforts to build better electric cars. He is disrupting the auto industry. Amazon and Jeff Bezos are no exception. Bezos founded Blue Origin in 2002 to make spaceflight possible for more consumers.

Part of Blue Origin’s purpose is to place colonies of people in orbit around the Earth, with amusement parks, hotels, and small cities for living and working. The main purpose is to preserve the Earth, providing paying customers with an opportunity to live in space. Bezos is still disrupting conventional wisdom about people living in space. He is using his wealth to continue his impact entrepreneurship. Furthering his social impact and social innovation, Bezos wants to reduce pollution on Earth by moving many energy productions to space. A social entrepreneur can bring about change on a world scale.

In 2013, Bezos bought The Washington Post, a long-running newspaper, for $250 million in cash. Three years later, he lifted the requirement of a paywall for subscribers to many local newspapers. This helped bring media information to people at a lower cost, and continued Amazon’s mission of disrupting and creating change.

A World of Change

Amazon started with the idea that disrupting the retail book industry could change the world. The company has now moved far past that original purpose. Driven by Jeff Bezos and his impact entrepreneurship, Amazon funds startups, promotes space travel, and influences many aspects of the media. The company will continue to be at the forefront of social change in years to come. 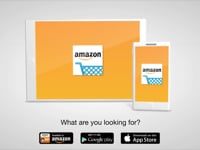 Amazon App – Earth’s Biggest Selection in Your Pocket – We see a present box, and then a number of items orbiting around a smartphone with the Amazon app that lets you find an item, buy it, and track its delivery. The Amazon app – what are you looking for?